Debt is a fact of life for people all over the U.S. But residents in some states have much more debt than others — and in some states, people index higher on certain types of debt, according to a recent Credit Karma analysis of states with the most debt.
Editorial Note: Credit Karma receives compensation from third-party advertisers, but that doesn’t affect our editors’ opinions. Our third-party advertisers don’t review, approve or endorse our editorial content. It’s accurate to the best of our knowledge when posted.

To determine which states’ residents have the most debt in the nation, we ranked states by their per capita debt-to-income ratios — that is, each state’s total debt per capita divided by its per capita income. In general, the higher the ratio, the harder it might be for residents in a state to pay down their debt.

Looking at debt-to-income ratio versus total debt alone can give a more complete debt picture for each state’s residents because it measures residents’ ability to manage their debt, not just their total debt load. (Learn about our methodology.)

See below for states where residents have the most — and least — debt as determined by their debt-to-income ratios, along with a look at how the debt burden breaks down in each state.

States where residents have the most and least debt

Total debt per capita is only part of the picture, though. If people are making more than enough money to cover all that debt, then the actual debt burden for residents in that state isn’t all that bad. For example, Connecticut’s total debt per capita is $61,520 — the twelfth highest in the nation — but that state’s personal per capita income is the second highest in the U.S., according to 2020 data from the Bureau of Economic Analysis. This make’s the state’s debt-to-income ratio 0.78. Therefore, the debt burden is not as heavy.

That’s why looking at debt-to-income ratio can give us a much better understanding of each state’s debt — it not only captures a state’s residents’ total debt, but also residents’ ability to manage that debt with the income they have.

Read on to see the 10 states in the nation with the highest debt-to-income ratios.

Which states have the most debt?

Here’s how the states rank when you look at those with the lowest debt-to-income ratios.

Which states have the least debt?

The following 10 states’ residents have the least debt, ranked by DTI as of Q4 2021.

Debt breakdown in states with the most and least debt

Not all debt is created equally. For example, mortgage loans can make up a large portion of a person’s overall debt, but it’s considered good debt as long as you get a mortgage that’s within your means. On the other hand, revolving debt — like credit cards — can be considered a bad form of debt.

For example, according to the Federal Reserve Bank of New York, Washington, D.C.’s average mortgage debt was $75,280 at the end of 2021, or 76% of total debt for people who live there.  By comparison, West Virginia, the state with the least debt, spent less on mortgage debt in Q4 2021 — just 54%.

At the same time, 18% of West Virginians’ debt was for auto loans, more than four times as much as in Washington, DC, where auto loans were just 4% of total debt. 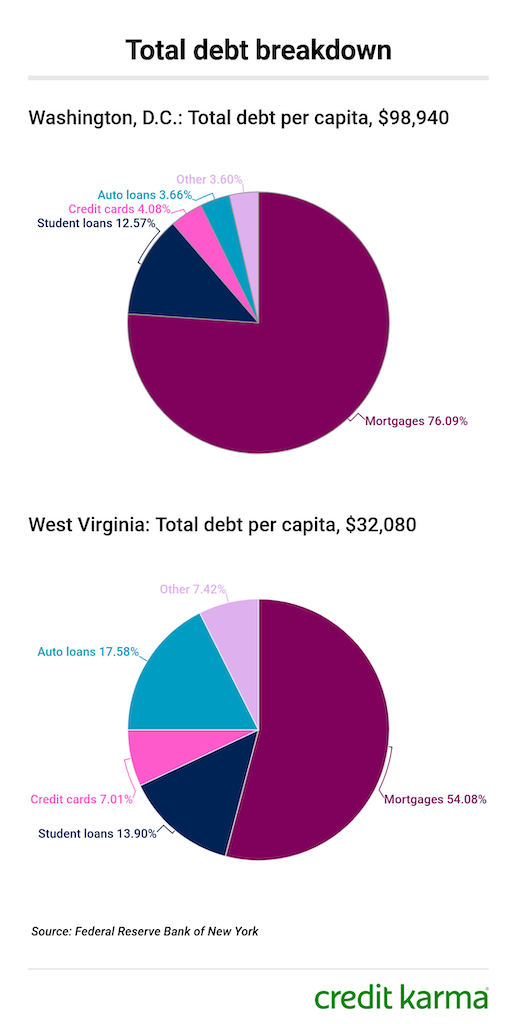 Tips to pay down debt

No matter where you live or what type of debt you have, paying it down can be tough. If you’re having trouble managing your debt, you’re not alone. Here are a few things to try:

Planning and writing down a monthly budget can be key to getting on top of your debts. Just be realistic about your spending habits and limitations, and revisit and adjust your budget as needed.

This can help if you’re juggling multiple payments on several high interest loans, like credit cards. One way to consolidate all that debt is by taking out a personal loan, which can come with lower interest rates than credit cards. But keep in mind that this type of loan generally only makes sense if you’re able to get a lower interest rate on your loan than you’re paying across your existing debts.

You can also consolidate your high-interest debt using a balance transfer credit card. These types of cards often offer an introductory 0% interest rate for balance transfers during a promotional period, allowing you to put more money toward paying down your principal and less toward interest.

Consider all your options options for debt consolidation as you look for the right solution for your situation.

Think about those streaming services like Spotify, Netflix or Hulu. Are there any mobile apps or other monthly subscriptions you don’t need? If you only use them occasionally, you might want to cancel.

Canceling a single monthly subscription of $10.99 could save you around $132 over the course of a year, freeing up more money to pay down debt. You might also consider free weekend activities instead of big dinners or outings, or other cost-cutting ideas.

These expenses might seem small, but they can add up over time. You might be surprised how much financial breathing room you can create for yourself by cutting them out of your budget.

Looking to refinance your debt? Get Started

About the author: Paris Ward is a content strategist at Credit Karma, providing readers with the latest news that will aid their financial progress. She has more than a decade of experience as a writer and editor and holds a bachelor’s… Read more.

Average American debt by age and generation in 2022

Average Mortgage Debt in America in 2022