Credit card debt is a fact of life across generations, geography and credit profiles, a recent Credit Karma analysis found — but Gen X and Baby Boomer members, along with those who have lower credit scores, are among those carrying the most credit card debt, on average.
Written by:

Editorial Note: Credit Karma receives compensation from third-party advertisers, but that doesn’t affect our editors' opinions. Our marketing partners don’t review, approve or endorse our editorial content. It’s accurate to the best of our knowledge when it’s posted.
Advertiser Disclosure

On average, people hold around $3,100 in credit card debt, according to a Credit Karma analysis.

But there’s some variation in average credit card debt when you break it down by generation, location or credit score range. Our study found that …

Total U.S. credit card debt hit a record high at the end of 2018, slightly surpassing a peak last seen in 2008, during the recession. Our analysis aimed to create a more-detailed picture of credit card debt, looking at different groups of Credit Karma members. (Learn more about our methodology.)

Looking at the chart below, you can see that Credit Karma members across generations carry upwards of $1,000 to multiple thousands of dollars in credit card debt on average.

Perhaps because of their younger age, Gen Z members (ages 18 to 24) carry the lowest credit card debt burden — an average of $1,358 per person — compared to other generations.

By comparison, Gen X members carry nearly triple the average credit card debt per person at $3,823. That’s equivalent to about four months of median mortgage payments in the U.S., according to the U.S. Census Bureau’s biennial American Housing Survey from 2017. 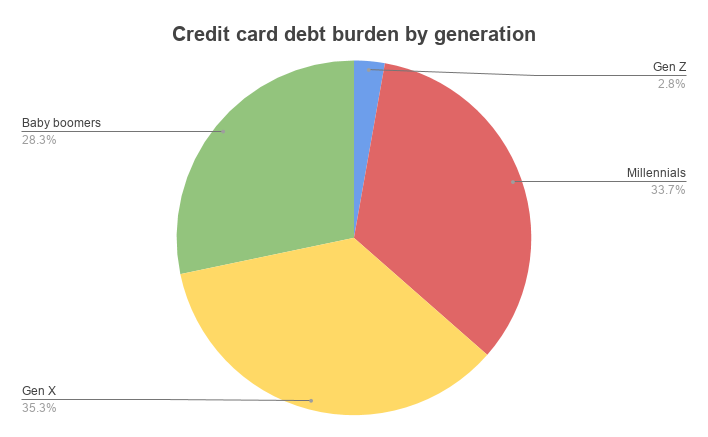 Cities with the highest and lowest average credit card debt

Looking at the 100 most populous cities in the U.S., we found that Credit Karma members in coastal Virginian communities are among those with the highest average credit card debt per person.

At least some of the areas with higher credit card debt may have something in common — a higher than average cost of living.

The median monthly housing cost in Virginia Beach, for example, is $1,198, according to the Census Bureau’s American Housing Survey from 2018 — higher than the national average of $1,036, also based on census data.

No matter how old you are, where you live or what your credit scores are, managing credit card debt can be a challenge. If you’re struggling with it, you’re not alone.

Here are a few ideas to consider that might help.

Debt consolidation involves taking out a loan (or line of credit) to cover your debt and help you pay it off faster. This new loan or line of credit pays off the debt, including interest, that has accumulated across your accounts. With the original debt paid, the debt-consolidation loan — which can be a personal loan — then functions just like any other kind of installment loan: You begin paying it off in equal monthly payments. But keep in mind that a debt-consolidation loan usually only makes financial sense if you’re able to get a lower interest rate than you previously paid on your balances.

Considering all your options is key to finding what might be the right solution for your situation.

Keeping a mental budget doesn’t always cut it. If you really want to get your finances in order, we recommend writing down a monthly budget and checking it often. Be realistic about your spending habits and limitations, and adjust your budget as you learn more about yourself and your financial habits. Challenge yourself to save more than you usually would, and consider putting those savings toward your credit card debt.

Haven’t been listening to Spotify as much as you thought you would? Cancel it. Only watch one or two cable shows but pay for the full package? Cut the cord and move to a subscription service like Netflix or Hulu. You could even try kicking your Starbucks habit or starting to look for free weekend activities — there are many ways to trim down your expenses. Then be sure to take those extra dollars and use them to pay more toward your debt.

To determine the average credit card debt among U.S. Credit Karma members, we looked at the open credit card accounts of more than 85 million members in March 2019. In aggregate, we analyzed the amount of credit card debt carried by certain age groups and VantageScore 3.0 credit score bands, information based on TransUnion credit reports. We also looked at aggregate zip code data in members’ TransUnion credit reports to develop a list of cities where members held the most average credit card debt. Specifically, we studied a list of the most populous cities based on U.S. Census data.

Oportun loan review: A personal loan that can help...

How much does it cost to file for bankruptcy?